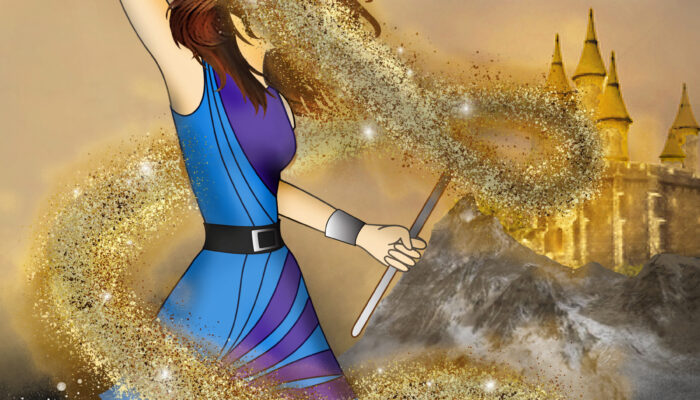 Crisanta Knight: Into the Gray

Maybe the gray was not where people went to get lost. Maybe it was the perfect place to be reborn. For in that gray was the potential to be anything, to become anyone.

Returning to protagonist school had confronted me with a mixed bag of change. Some things were good. i was a star athlete on my Twenty-Three Skidd team, my friends and I were closer than ever, I’d made amends with my traditionalist headmistress, and the surprisingly kind grandson of King Midas was doing his best to win my affection.

Other changes, however, were not so sweet. The greater realm now knew about—and feared—my Pure Magic, and an upcoming trial by realm higher-ups and Fairy Godmothers would decide my fate. My former archenemy Princess Mauvrey was under a sleeping curse that my friends and I couldn’t seem to crack, which meant we couldn’t access the vital memories of a dead Fairy Godmother stored in her brain. Meanwhile, the commons rebellion in our realm was only growing in strength and violence. And I . . . Well, I’d taken my first life. The antagonist queen’s careful planing paired with the increasing, hungry power of my life-related Pure Magic had caused me to snap and kill someone. He’d been a villain, yes, but that didn’t placate my morality. Especially given the ongoing internal war I struggled with over my abilities and their potential.

As I fought to be a strong hero, princess, and more importantly person, I was flogged by the many questions posed by my enemies, my friends, and my own conscience about how I was changing—and what I was changing into.

Would my Pure Magic inevitably corrupt me like the antagonists wanted and our realm’s higher-ups and Fairy Godmother Supreme feared? My personal fate aside, would my friends and I be able to stop the antagonists from taking over our realm? And even more uncertain, was I more afraid of not being powerful enough to stop them, or being even more powerful than anybody anticipated?