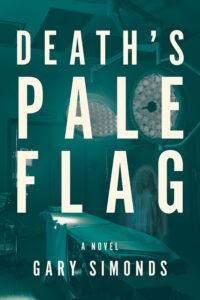 “The author did a marvelous job of portraying some of the norms of society and breaking them. He wants the readers to have a peek at what the life of a so-called ‘Hero of People’ looks like without downright degrading it, like some authors seem to be doing these days. I think everybody, doctor or not, should read this book. There’s a norm fixed deep inside our minds- heroes don’t need saving. But here’s what’s wrong with the theory. Everything. Everybody may need saving at some point, if not by others then by themselves.

Nevertheless, there seems to be glory in Ryan’s life after all, the times when he marched into the operation theatre, I couldn’t help but wonder and be concerned for the patient. But Ryan was no loser at his job. He knew neurosurgery like the back of his hand.

One thing I appreciated very much in Death’s Pale Flag was the way Gary described what was happening in Operation Theatre in the ‘common people’s language. He didn’t simply throw away all that medical jargon and expected the readers to get along. He broke it down into digestible chunks so you could easily chew on (and taste them).

Likewise, I adore the way Ryan interacted with his patients. Not only was he kind to them, but he also spared time to console them and comfort them when there was bad news to be delivered. He was very responsible, sometimes preferring his patients over his family, even if this caused him great hurt.

The title of the book yells that the author may just be a great fan of Shakespeare- Death’s Pale Flag, the famous words of Romeo to Juliet when he mistakenly thought she was dead. So could it be that death (albeit a fake one) is coming for Ryan or his family members? The thought kept me on edge, especially at the ending pages of the book.

One thing that I didn’t enjoy was the slow pacing of the book. I would have enjoyed the book much more if it were fast-paced. The hospital scenes were alright but some of the scenes were dragged a bit too much for my liking. But if you’re okay with descriptive scenes with a slow pacing, you may not even notice this.

Highly recommended for fans of the autobiography ‘When breath becomes air’ and TV shows ‘The Good Doctor’ and ‘Gray’s Anatomy’- Death’s Pale Flag is a cozy fiction with light horror and the enlightenment of attending a mental health seminar, all in one book.”

“This book is magnificent. While weaving a fascinating paranormal mystery tale, Gary Simonds has artfully depicted the pain and poignancy (and nobility) of life in neurosurgery, both for the surgeon and his/her spouse/family. Like all good art, he engages the reader, then takes them on not just a narratively-described but an emotionally-cathected journey; the relentlessness of brain surgeon, Ryan’s work/life and existential/humanistic conflicts are grueling to experience, as is the endless compassion and questioning that his wife, Kelly, must live with. In fact, despite the increasingly unsettling paranormal events and the heart-racing peeks into the neurosurgery universe, the heart of this novel lies in the Brenan’s struggle to save their marriage.

Lovers of medical thrillers will enjoy the accurate portrayal of the minute to minute critical decision making involved in caring for the tidal waves of sick and injured patients crashing upon our hospitals every day. Lovers of ghost stories will savor this story of a man who is relentlessly and inexplicably haunted, rather than a dilapidated house or mist-laden hollow. And, this is a novel that should be assigned reading for anyone who wants to explore the fallout of workaholic over-commitment to even the most noble of causes, and those who wish to TRULY understand life in medicine and life in a “medical family.”

The writing is sensational. The characters are compelling – the reader thirsts for evermore info about Kelley and Ryan; the wordsmithing of contexts and settings is eloquently intelligent; and the drama of the story is well-paced.

Descriptions of in-the-trenches experiences of a neurosurgeon and the interplay with other members of the team and the variety of patients dealt with (their brief stories describing the circumstances that lead to the tragedies that resulted in their injuries) are nothing short of fascinating and galvanizing.

The theme of “that which you focus on and immerse oneself in magnifies; what you ignore in life shrinks” is powerful… We readily come to understand that much can be lost in that cauldron of duty to endlessly needy constituents, ego gratification, going where the affirmation is, the reflexive avoiding of the tensions of a failing home life, etc..

The vignettes that offer a glimpse into life in the E.R., ICU’s, and operating rooms are “grab the reader by the shirt and shake them into paying attention” effective. They are fast-paced, fascinating, educational, and awe-inspiring. They leave the reader’s head spinning. And each vignette begs for the reader’s consideration of its meta theme: