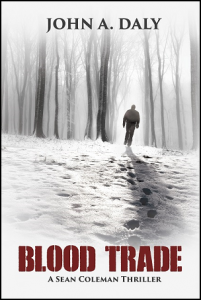 Sean Coleman is back in the latest thriller from John A. Daly, set in the mountains of Winston, Colorado.

Six months after the murder of his uncle, Sean is trying to get his life together. He’s stopped drinking, he’s taking better care of himself, and he’s working hard to keep a fledgling security business afloat. At a blood plasma bank Sean frequents to earn extra income, he meets the distraught relative of Andrew Carson, a man who went missing weeks earlier on the other side of the state, with a pool of blood in the snowy driveway of his home as the only clue to
the man’s fate.

Sean decides to help in the search for Carson and quickly finds himself immersed in a world of deception,  desperation, and danger—a world in which nothing is what it seems, and few can get out of with their lives.

With a thirst for creative expression that went beyond the logic and absolutes of computer programming, John developed an interest in writing. His early work included newspaper editorials and film and television reviews for entertainment websites. He later became drawn toward more substantive commentary on world events. He currently writes political, cultural, and media analysis columns for the website of Bernard Goldberg, former CBS News journalist and The New York Times bestselling author.

John felt compelled to take his writing to the next level after watching a television interview with former NFL football player, Tim Green. Inspired by Green’s career transition from a professional athlete to an accomplished author, John found the motivation to begin work on his first novel, From a Dead Sleep.

From a Dead Sleep is the story of a profoundly flawed man who witnesses a tragic event that no one else believes, and that man’s quest for the truth and redemption. The mystery novel unfolds in the dense mountain ranges of Colorado where John has spent much time camping, hiking, and enjoying the outdoors.

Blood Trade, is the second book in the “Sean Coleman Thriller” series;