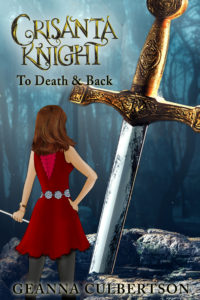 And here I thought saving one realm was enough to fill up my to-do list.

Following the revelation that the antagonists were after the location of all of Book’s genies, my friends and I knew our Wonderland road trip was far from over. With the magic fluctuation event known as the Vicennalia Aurora days away, antagonists and magic hunters hot on our tail, and my treacherous brother Alex and I in competition to claim Excalibur, matters were becoming larger-than-life very quickly.

I was one of those matters. My Pure Magic powers of life were growing incomparably strong. As I discovered the extent of my abilities, I was being tempted by the corruption that came with them. But how could I stop? Camelot’s terrain was unlike anything we’d ever encountered. From evil kings to bloodlusting Bluebeards to the Questor Beast, I needed my magic now more than ever. This world and so many others depended on me.

And yet, as my friends and I ran against the clock, our enemies, and the prophecies of the future that pursued us like hungry shadows, I’d come to learn one thing with absolute certainty. One thing that I would keep learning again and again. In a world where my beliefs about goodness and morality were being tested, and my soul was at stake, it was not my abilities of life that were my most valuable strength; it was my friends.

They were my greatest source of magic.