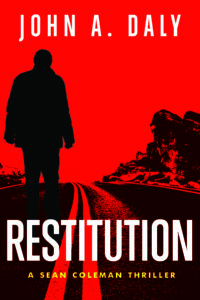 Life’s gotten better for hard-edged security guard, Sean Coleman. With personal affairs in order and relationships rekindled, he travels to Las Vegas to help celebrate a buddy’s last days as a bachelor.

Soon after he arrives, however, a twist of fate spawns a reunion with an old flame. Curiosity and a desire to make amends unexpectedly leads Sean down a dark path into the Vegas underground, where another face from the past emerges — a federal fugitive whose family, years earlier, altered the course of Sean’s life.

A harrowing escape drops Sean in the barren wasteland of a Nevada desert, miles away from the glitz and glamor of Sin City. There, he must fight to stay alive against a well-armed group of men whose bloodlust and greed won’t stop them from getting what they’re after.

John felt compelled to take his writing to the next level after watching a television interview with former NFL football player, Tim Green. Inspired by Green’s career transition from a professional athlete to an accomplished author, John found the motivation to begin work on his first novel, From a Dead Sleep. It was the first book in the Sean Coleman Thriller series, followed by Blood Trade, Broken Slate, Safeguard, and now Restitution.